The guillotine falls
Upon a rose petal
Velveteen as that storybook rabbit
Worn tossed aside
Eyes missing
From the vulturous wear and tear.
What is
Carrion? Roadkill
Sloughed crosses on the dogwood
Childrens’ heads
Rolling
In Burma.
Even in the American ghetto
The massacres occur
But not like this.
Not like this.
This is only a guess.
But photographs are sirens bringing
The truth the rocks the cliffs
Near
As the banshee crosses cultural divides
Yes dear Odyssey
The banshee wails.

We conjure atoms. Power over unenforceable formidable atoms because. We are afraid. Hiroshima saved many lives reports western history books…well. Tell that to. I am thinking of. A woman still angered over the heat. The radioactive earth and flesh. Why’s she still pissed people would ask as they ask about childhood’s ravage. I did nothing I wasn’t entitled to do. Said the security officer unbuckling uniforms over his daughter. Fear is. What it is. A boomerang. An industry built upon toy handcuffs sadomasochism. An industry. How many lives they say. Say. Epidermal peeling people molting. Chameleons. Say.

in the movie, tenderness ended with this: a circle of children cast stones at a bird, a bird already injured, & when the girl did not join, thrust a stone into her hand, chanting, throw it, throw it! today, wondering when the sweetness left, when the Sunday teacher stopped saying he was a sweet boy; when the brother first said “hey, did you know our little sister is a bitch?” i see, someone says, a gap in foundation, a furrowing of landscape, where we place the pit bull. you see, via the pit bull, a lack of negation, a holocaust through action & hope inverted. well. it is not a neutral conversation, he says, but it must be had. be had. i changed my bedroom walls pink to yellow at a young age; no shams, pillows without cases, curtains torn like human membrane at the window — to remember, that’s all, & aghast, how circuitous it seems, how the Camps return in variant forms, how the immaculate conception becomes unholy, degraded, shit upon. in the movie, the girl’s braids change blond to grey — she casts that stone forced, & as the bird dies, in twitches & failed flutters, she holds it, cold, colder. 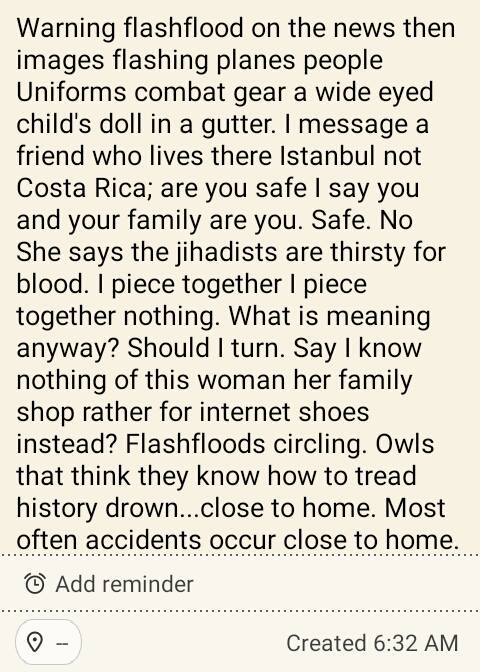